Theatre On The Bay

Drama, music and dance hosted in a large 1970s complex including an arena and an opera house.

The Cape Town International Convention Centre is a convention centre in Cape Town, South Africa. The centre opened in June 2003. It is run as a partnership between the City of Cape Town and the Western Cape government. 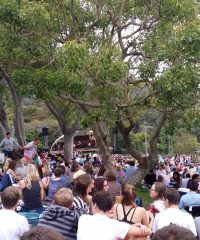